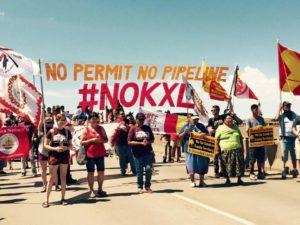 Contact Members of the Joint Appropriations Committee to urge a NO vote on these poorly written and likely unconstitutional bills!

The bills will be heard in Joint Committee on Appropriations TOMORROW morning starting at 8am in Room 362 of the Capitol. Please contact committee members (email list below) to encourage their NO vote.

Here’s a brief overview of the bills:

Senate Bill 189: “establish a fund to receive civil recoveries to offset costs incurred by riot boosting, to make a continuous appropriation therefor, and to declare an emergency.”

This bill sets up an entirely new kind of crime (“Riot Boosting”) in South Dakota that potentially ensnares people and organizations who are in no way directly related to any kind of illegal activity. This is clearly not an appropriations bill (it was assigned there to speed it through the process), has serious legal consequences, and will likely result in numerous and expensive lawsuits against the state.

Senate Bill 190: “promote pipeline construction and fiscal responsibility by establishing a fund, to authorize a special fee for extraordinary expenses, to make a continuous appropriation therefor, and to declare an emergency.”

BOTH of these bills were introduced far beyond the regular deadline for introduction of new bills, despite the Governor’s claim that they have been in the works “for months.”

BOTH of the bills declare an emergency that does not exist–in their last quarterly report, TransCanada, by their own admission, is lacking literally dozens of permits, easements, and right-of-way grants that are necessary for the company to begin construction in South Dakota.

In addition, TransCanada’s presidential permit for the Keystone XL has been enjoined in federal court, and no construction (other than pipe storage yards) is permitted by the judge. There’s simply no way this pipeline is going to be built this year, and there’s no reason to rush through poorly-written legislation that could cost our state millions in lawsuits.

Thank You For Taking Action!

about 9 months ago
This message is only visible to admins.
Problem displaying Facebook posts. Backup cache in use.
PPCA Error: Due to Facebook API changes it is no longer possible to display a feed from a Facebook Page you are not an admin of. The Facebook feed below is not using a valid Access Token for this Facebook page and so has stopped updating.