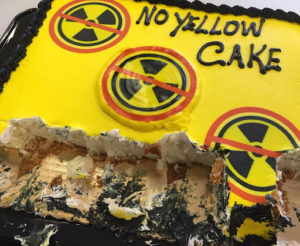 On October 6th, the State Water Management Board (WMB) will consider Powertech USA’s motion to resume their water permit & ground water discharge permitting processes for their proposed In Situ Leach uranium mine in Custer and Fall River Counties. (What is In Situ Leach mining?)

Those processes were put on hold in 2013 so that Powertech could pursue their federal permits–and those permits are still not finalized. While remote participation will be an option during this hearing, DRA and allies will also be making an effort (following COVID safety protocols) to fill the hearing room in Pierre to demonstrate strong public opposition to allowing this process to move forward. You do not have to be an intervenor to attend–ALL concerned citizens should plan to make their position known!

THIS IS YOUR CALL TO ACTION:

1.) First, Please Sign-On to our Letter to the South Dakota Water Management Board and please share with your family, friends, and networks.

2.) Next, join us in Pierre on Oct. 6th (maybe the 7th) to let the Water Management Board know that we will continue to resist attempts to mine radioactive, toxic uranium. The mining would be temporary (about 20 years), but water and land pollution would be permanent. Unfortunately, the US Environmental Protection Agency voted to grant the federal permits to permanently pollute clean water under the mine site at the Dewey-Burdock location. However, that decision is now under appeal. Therefore, those water permits at the federal level are in fact in legal limbo. Uranium Mining: Not Worth the Risks

They propose taking vast amounts of water out of the ground, mixing it with chemicals, then injecting it back into the ground to dissolve and extract the uranium, then concentrating the radioactive material (yellow cake) on-site for shipping by truck. And then they want to take the wastewater and inject it back into the Inyan Kara aquifer.

In the waning days of the Trump Administration, Powertech gained approval for their federal permits and safe drinking water act exemption from the Nuclear Regulatory Commission (NRC) and the Environmental Protection Agency (EPA), respectively. But those permits are now under appeal. But, even with their federal permits tied up in courts and under review, Powertech is trying to move forward in securing their state permits–a process that was put on hold back in 2013 due to the fact that their federal permits weren’t finalized. They STILL aren’t.

Among other hazards, radon emissions, toxic heavy metals and other pollutants, including chloride, sulfate, sodium, radium, arsenic and iron, are in ISL wastewater ponds. Accidents and leaks in this kind of operation are inevitable, raising concerns about runoff into the Cheyenne River and Angostura Reservoir. It is a big deal! We’re not just talking about some inert solution. The most serious radiation release in the US came from a tailings pond spill at a uranium mine in New Mexico.

In response to Azarga’s (then Powertech’s) lobbying, in 2011, the state abdicated responsibility for underground water regulation, leaving that in jurisdiction of the EPA, which has no offices in South Dakota. This means monitoring and enforcement would be inadequate.5

Economics: Too much is at stake. Protect what we have.

Uranium mining is a boom and bust business, prioritizing short‐term extraction and exploitation for shareholder gain over the sustainable income source oﬀered to local people by tourism and agriculture.

This accounts for 72% of South Dakota’s total tourism dollars. South Dakota depends on tourism for 27,000 jobs and 19% of its tax revenue.  We don’t need new uranium mining to tarnish SD’s status as a world-class tourist destination, for a handful of risky, temporary mining construction jobs. Too much long-term damage to land, water,  air, and cultural resources is at stake. When uranium companies recently tried to reopen mines around the Grand Canyon, the federal government moved to protect natural heritage by banning uranium mining in a 1 million-acre area around the scenic visitors’ attraction. “Mining is a boom-and-bust industry that harms tourism and robs local economies of long-term benefits.”7

Clean, potable water is critical for agriculture in this semi-arid state in the midst of serious drought. It’s obvious that our water needs to be protected and conserved. ISL uranium mining will result in contamination of ground and surface water with radioactive materials and heavy metals harmful to humans, wildlife and livestock. These three counties will be the most immediately affected.

about 11 months ago
This message is only visible to admins.
Problem displaying Facebook posts. Backup cache in use.
PPCA Error: Due to Facebook API changes it is no longer possible to display a feed from a Facebook Page you are not an admin of. The Facebook feed below is not using a valid Access Token for this Facebook page and so has stopped updating.