About Us What is Dakota Rural Action? 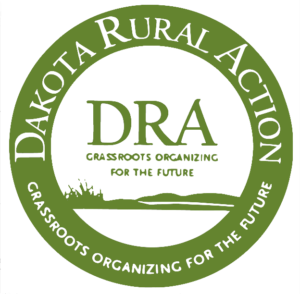 WE ENVISION AN ACTIVE AND ENGAGED MEMBERSHIP PROMOTING HEALTHY, BEAUTIFUL, AND JUST FOOD, AGRICULTURE, AND ENERGY SYSTEMS THAT PROTECT CLEAN AIR, WATER, AND SOIL FOR ALL THE CURRENT AND FUTURE INHABITANTS OF SOUTH DAKOTA.

WHEREAS, accounts of incidents of hate targeted at groups such as: Native-American, Muslim, Sikh, Hindu, Arab, Jewish, Latino, African-American, Asian, female, people with disabilities, refugee, immigrant, lesbian, gay, bisexual, transgender, queer, two spirited and other vulnerable community members have been reported to police, on social media, and to advocacy organizations across the nation and in South Dakota; and

WHEREAS, all land now known as South Dakota is land stolen from the Oceti Sakowin, The Seven Council Fires, the Great Sioux Nation, and

WHEREAS, people were stolen from their homelands, enslaved, and forced to come to what is now known as the United States and it territories for the economic benefit of white people, and

WHEREAS, many marginalized groups of people including but not limited to Native Americans, American Indians, and Alaskan Natives, BIPOC (Black, Indigenous, People of Color)  refugees, immigrants, LGBTQ2SIA (lesbian, gay, bisexual, transgender queer, two spirit, intersex, asexual), persons who are houseless, and persons not U. S. citizens both documented and undocumented by the U.S.government and residing in South Dakota are hurting and fearful as a result of the rise of discrimination or the rhetoric of exclusion and vilification; and

WHEREAS, MMIWCM (Murdered and Missing Women, Children and Men) numbers continue to increase as a result of an increase in activity by extractive industries, lack of empathy of law enforcement from state and federal government; and

WHEREAS, under the strong Indigenous female/women leadership continues to build such community building programs such as, but not limited to, Native voting rights, feeding programs for families in isolation due to COVID, safe sleeping spaces for unhoused relatives, birthing and healing programs, food justice and food rights, food harvesting and preservation, language and traditional knowledge programs; and

WHEREAS, there is a national #LANDBACK movement led by Native Americans and Alaska Natives to regain stolen land; and

WHEREAS, our communities draw strength from the diversity of people including age; ethnicity; gender; gender identity; language; physical and mental abilities; race; religion; sexual orientation; political ideology; and perspective; and

WHEREAS, the United States and South Dakota’s Constitutions support the peaceful exercise of free speech and assembly for all people; now

THEREFORE BE IT RESOLVED that Dakota Rural Action seek out and become good allies to a variety of Native led organizations and grassroot efforts, encourages employers, organizations and governmental entities to uphold justice, provide equality and equity of opportunity for all, actively encourage all voices to be heard, promote inclusion, and oppose acts of intolerance or discrimination; and

BE IT FURTHER RESOLVED that DRA strives to an ally and seeks counsel from our friends on ways we can better achieve this goal, and

BE IT FURTHER RESOLVED that DRA opposes the enactment by the State Legislature or by local ordinance any measure that would discriminate.