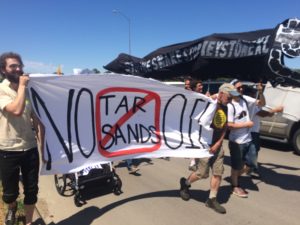 Today, Plaintiffs and State agreed to settle the “Riot Booster” case, filed last spring by the ACLU on behalf of Dakota Rural Action and other organizations and individuals after Governor Kristi Noem signed into law an act to criminalize free speech in South Dakota.

The law targeted people and organizations who protest or speak out, as well as those who support their cause through words, peaceful actions, or financial means. Despite state’s claims about the intent of the law–the “Riot Booster” Act did NOT criminalize riot–because rioting was already illegal, and remains so. Under the settlement, the parts of the law that remain are those that were already in effect–it was and is illegal to commit acts of force or violence.

The specific goal of this legislation was to criminalize opposition–specifically against the Keystone XL pipeline–but the bill’s language was so broad as to target anyone who spoke out against a project or policy, or urged others to do so. Rushed through in the final days of the 2019 session with the help of a legislative super-majority, proponents were warned specifically and repeatedly of the clearly unconstitutional nature of the bill, but chose to ignore those warnings. Now, South Dakota taxpayers will be forced to foot the bill for the Governor’s and Legislators’ folly.

DRA Board Chair and Winner-area rancher John Harter said about the decisive victory:

“Gov. Noem and Attorney General Ravnsborg settled this case because they are clearly in the wrong – something they and the Legislature were warned of as they rushed to pass this unconstitutional law. In fact, the whole process of pushing pipelines through this state – from the use of eminent domain to benefit a foreign corporation, to cracking down on citizens protecting the land and water – violates our constitution and leaves taxpayers, once again, to foot the bill.

We are proud to have stood alongside our Native allies to fight for the rights of all South Dakotans, and we thank the ACLU for their work on this crucial case.”

SUPPORT OUR WORK to protect land and water for future generations!
Click HERE to contribute to our pipeline fund. And don’t worry–you can’t be targeted as a Riot Booster for doing so. 🙂

about a week ago