Crossover Day–the day that all bills must make it through Committees and Houses of origin–was on Monday of this week, and now legislation that has survived its initial test will “cross over” to its second round of hearing and debate. At the same time, a few bills have been moving ahead with leaps and bounds, and are already on the Governor’s desk, awaiting a signature or a veto. 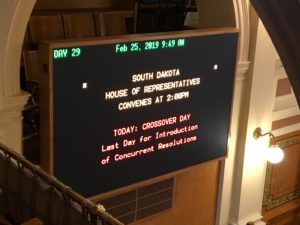 A few notable bills that were tabled this week or sent to the “41st Day” (killed):

Tabled in Joint Appropriations Committee, this bill would have kept the Governor from “sweeping” forest management funds into the general fund–instead keeping them in a separate fund to manage fire suppression and insect infestations.

This bill would have opened the taps of emergency state aid for counties in crisis, but also added “protests” to the language of emergencies under which the governor could suspend rules of state agencies. It was tabled by request of the prime sponsor.

HB 1178 revise provisions regarding the beginning period for absentee voting.

This bill started out by shortening the early voting period from 45 days to 14. A few amendments later, it set up two deadlines–one for overseas military and one for everyone else. It was defeated after opposition testimony from county auditors all over the state.

This bill, like an earlier companion (HB 1234) would have given a portion of contractor’s excise taxes on newly constructed CAFOs to the county (or school district) in which the CAFO was built. Both were tabled in committee.

After over two hours of testimony, committee questions, and discussion, House Bill 1191 passed the Senate Ag Committee on a 7-2 vote yesterday just after noon. The legislation follows the 2018 Farm Bill in allowing states to set up their own programs to grow, produce, and process industrial hemp and derivative products. Dakota Rural Action, SD Farmers Union, and SD Stockgrowers all testified in favor of the bill, along with ag processors and individuals.

The Industrial Hemp bill is prime-sponsored in the House by Rep. Oren Lesmeister (D-Parade); he is joined by 42 other House sponsors and 19 sponsors on the Senate side. Despite strong opposition from the Governor’s Office, Department of Public Safety, and Department of Health, which primarily focused on questions around whether legalization of hemp would make marijuana laws harder to enforce, the majority of Committee members found the arguments to be dubious with ongoing pilot programs in other states, and that Farm Bill legalization means industrial hemp and derivative products will be transported through our state regardless of whether South Dakota has its own program.

Keeping the momentum going on the Senate floor is now key to the bill’s passage–opposition from Public Safety, Dept. of Ag, and the Governor’s office will continue to be strong, but a decisive vote will show clearly the intent of the legislature to override any gubernatorial veto.

The bill will be debated on the Senate floor next week.

The House Commerce & Energy Committee will hear testimony on Senate Bill 15 on Monday, March 4th. We wrote about this last-minute hoghoused bill in the Legislative Update a week ago, and despite the “tsunami of emails” received by Senators, the bill survived Crossover Day on a 21-14 Senate floor vote. Getting it through meant bringing a floor amendment that purported to “address concerns” of those emailing and calling; however, the amendment simply removed one section of the bill that was in no way related to those concerns.

To recap: this Public Utilities Commission (PUC) bill started out as a simple change extending the wind facility permitting timeline from 6 months to a year. Dakota Rural Action and South Dakotans for Responsible Renewable Energy (SDRRE) supported the bill in committee, and it was opposed by wind development companies (not utilities–developers) and the Governor’s office. Senate Commerce & Energy Committee deferred action, and told the PUC to sit down with proponents and opponents to craft a compromise.

Despite both DRA and SDRRE communication with the PUC, both citizen-based organizations were locked out of the process–according to PUC Commissioner Gary Hansen “because the other side would not permit it.” The bill came back to Committee on the final day for consideration, and it was a complete rewrite (hoghouse) of the original bill–and of the entire section of code dealing with energy generation & transmission facility permitting.

DRA was able to get a draft copy of the amendment the night before, and spread word among allies to contact committee members, but we were unable to attend the hearing. The hoghoused bill passed its committee vote 5-2, and the following day DRA “officially” came out against the bill, linking to the newly-adopted language in last week’s Legislative Update.

We are renewing the call for members to urge defeat or substantive amendment to this bill in House Commerce & Energy Committee on Monday morning. Please email or call Committee members over the weekend, ahead of Monday’s hearing. Some specific talking points are listed below the contact info.

Here are some specifics on what we OPPOSE in SB 15:

House Commerce & Energy is the last, best place to amend the bill–if it survives committee in its present state, it will be very difficult to bring amendments on the House floor. Another concern is that House amendments would not be concurred with in the Senate, leading to a conference committee and possible reversion back to the bad hoghouse. Please make contact on this bill today!

Thank You For Taking Action!

So much love and respect for our friends at B & G ProduceA new year and an announcement from your friends at B&G Produce.I'm not sure how many of you know the story about how B&G came to be, so I'd like to take a minute to share that story with you. It was late 2008 or early 2009 and there was an online discussion somewhere that asked young locals "what business they'd like to see come to Pierre." The resounding answer was "Target!" and I thought "sure, but that's not happening."It made me think, though, about what I wanted to see in Pierre. After living in Indianapolis and San Diego, what did I miss from those cities? I missed a coffee shop open later than 4pm! I also missed weekly farmers' markets. Every Thursday while I lived in San Diego, I would walk down to my local farmers' market to pick up flowers, basil, avocados, tamales, carrots, and whatever other fresh produce and goods were available. I truly missed that experience and after talking with Matt, we thought, let's help start a farmers' market in Pierre.In our efforts, we met another person who was also interested in starting a farmers' market. She said she'd handle all of the paperwork if we worked on getting vendors.We quickly realized that finding produce vendors was going to be tricky, if not impossible. We were able to find a beef vendor, someone with dog biscuits, and a couple other vendors, but no produce. Ok, we thought...what if we grow some vegetables on my parents' land to help get the ball rolling. We had no intention of being vendors beyond year one. We, of course, wanted to shop at the market!Our first market was May 23, 2009...a week after Matt and I got married. If you've been following our journey, you know we've been growing vegetables since then. Whether part-time or full-time, we have been growing healthy and delicious vegetables in some way since then. And, we've loved all of it.But, all good things must come to an end. We decided in early fall that 2021 would be the last season for B&G Produce. And, as sad as we are to see this journey end, we are very excited to finally attain our initial goal. As of May 2022, we will be customers at the Capital City Farmers' Market, a market we are so proud to have started way back in 2009! (We are also excited about the possibility of taking a summer vacation!)So, thank you to all of our customers along the way. Whether you are someone we met in the very beginning, somewhere in the middle, or just this past year...we appreciate each and every one of you.Please keep supporting all the vendors at the Capital City Farmers' Market. We want to see it continue to grow beyond us...and we believe it will. Thank you and cheers to 2022!!Lindy and MattDebby and Crayton ... See MoreSee Less

Karen Moore is 25 years old and lives on Sicangu Lakota land in Mission, South Dakota. Karen is the first person to complete our yearlong fellowship to develop and support folks who are interested in ...
View on Facebook
· Share

This!Are you interested in starting a food-related business but not sure where to start? Do you want to be able to grow food for your family to save money and eat healthier? Are you passionate about changing out food system to improve the health of the Sicangu Oyate? If you answered "yes" to any of those questions, then you're a great candidate for our Waičaȟya Ičaǧapi Kte (WIK) apprenticeship which is accepting applications now! Learn more and apply at: sicangucdc.org/fsi-internships ... See MoreSee Less