Now that deadlines for filing bills have passed, the Legislative Research Council’s (LRC) bill list has reached something like 499 pieces of legislation. That said, a few of those bills have already died in committee, and some have leaped through their committee and floor votes at high speed.

Among that list are numerous “hoghouse vehicles” or “carcass bills,” which are bills filed with a title and virtually no contents. That’s so legislators who have an idea that’s not fully fleshed out can go in and amend the bill later or, in some cases, to have a placeholder bill waiting to undo legislation that passes earlier in the session (the last bill that passes is the one that prevails).

Here are a few hoghouse vehicles we’re keeping an eye on: 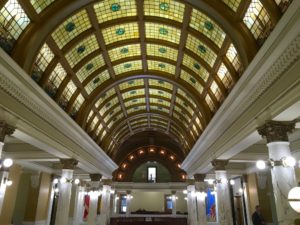 “There are pro-winders; there are anti-winders, but please don’t throw this out the winder,” Senator Brock Greenfield joked to the Senate Commerce & Energy Committee on Senate Bill 64, which requires turbines in new large-scale wind development projects to use Aircraft Detection Lighting Systems (ADLS).  These FAA approved systems are designed to turn on the flashing red beacons of turbines only when aircraft are in the area, and are required in North Dakota (other states are considering similar legislation as well, and many counties are currently requiring ADLS systems as part of their local permitting process).

Unlike some of the wind energy-related legislation we’ve seen in previous sessions, this bill enjoys broad support by both pro-wind energy groups and groups that are highly concerned with the impacts of these large industrial developments in rural areas. Senator Greenfield brought an amendment to committee that would have changed the requirement from “lights off” to “lights dimmed,” but after discussion with proponents of the original bill (including DRA), the committee agreed to defer for a week, and the prime sponsor will move to strip the amendment and bring back the original language next week.

Recognizing the high rates of Missing & Murdered Indigenous Women (MMIW), and sharing information, resources and training on this epidemic came into the national spotlight with the introduction of Savanna’s Act in Congress last year. While that bill became mired in political maneuvering, it has been re-introduced this year on the national level.

On the state level, bills have been introduced in both houses in an effort to address the problems with education, training, reporting, and sharing of information about missing and murdered indigenous persons. DRA staff and members have themselves been educated by our Native allies on the issue, and how it is exacerbated by proximity to oil & gas development and pipeline construction. We encourage our members to support these important pieces of legislation and will use social media and other media outlets to announce hearing dates and times:

HB 1237 establish the duty to collect data and share information on missing and murdered indigenous persons.

SB 164 provide uniform procedures for the reporting of and investigation of missing and murdered indigenous women.

In Case of Protests Throw Out Rules

A bill has been introduced on the House side that would add “disorderly conduct” and “protests” to the list of reasons the governor “may suspend the provisions of any rules of any state agency.” House Bill 1160 purports to answer the question of how counties would deal with extraordinary costs in the event of protests around construction of the Keystone XL pipeline by proposing to lower the threshold at which state assistance would flow to affected counties.

Unsurprisingly, the bill fails to address the question of why taxpayer dollars are being pledged to protect the interests of a foreign corporation seizing private property through the use of eminent domain, endangering the land and water we depend on to survive, and trampling the rights of our own citizens. We plan to raise these questions in committee hearings on the bill.

Senate Bill 147 is the result of extensive research and discussion by DRA members Angela Sasse-Pulse and Glenn Pulse after their organic farm and processing facility were hit twice by devastating losses from overspray and chemical trespass.

After a failed attempt to address the issue in the 2018 session, and subsequent talks with the Dept. of Ag and numerous other affected producers, they have come back with a bill that simply requires all commercial applicators to carry liability insurance. The bill has numerous sponsors in both House & Senate, and has the ability to address a serious problem that affects not only organic producers, but conventional and specialty producers and beekeepers alike. Producers who have been victims of overspray and/or chemical trespass are also invited to share their stories at the following link, and are encouraged to contact Senate Ag Committee members in support of the bill. DRA will be notifying members of the date and time of hearing when it is scheduled, as well as providing contact info for committee members.

Lobby Days is scheduled in Pierre for the evening of Sunday, February 10th from 6-8:30pm (training and social at Red Rossa Italian Grill) and Monday, February 11th from 7:30am-3:30pm at the State Capitol.

Our online RSVP form for Citizen Lobby Days is now up online. You can RSVP by filling out the form online here: https://goo.gl/forms/h7EmHoMTVzAJFGhz2

If you have questions or would like to RSVP by phone or email, please contact DRA Lobbyist Rebecca Terk at (605) 697-5204 x260  or rebeccat@dakotarural.org.

We Can’t Do It Without You!

Funding for DRA’s work during the South Dakota Legislative Session comes entirely from our members. Please consider a gift to our legislative fund today!

about 6 months ago
This message is only visible to admins.
Problem displaying Facebook posts. Backup cache in use.
PPCA Error: Due to Facebook API changes it is no longer possible to display a feed from a Facebook Page you are not an admin of. The Facebook feed below is not using a valid Access Token for this Facebook page and so has stopped updating.