Circuit Court: Boards Have Right to Say No to CAFO Permits July 10, 2018

This post originally published on DRA’s Legislative Blog on May 3, 2018 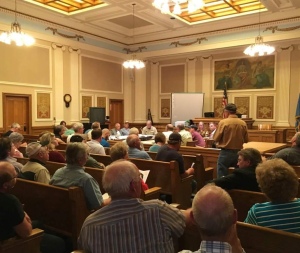 The Grant County Board of Adjustment’s decision to deny a Conditional Use Permit for a Concentrated Animal Feeding Operation (CAFO) was deemed lawful this week by Circuit Court Judge Carmen Means.

On April 30th in the Codington County Courthouse, Attorney Chris Healey argued for Berg Farms that because their swine CAFO permit application met the basic requirements outlined in the county’s ordinance, the Board had no authority to deny the permit. Further, he argued that three members of the board acted improperly by receiving outside information (ex parte) from opponents of the project and should have recused themselves from the decision-making process.

Therefore, he claimed, the court should remand the matter back to the county board, remove three of the four members who had ex parte communication (the three who had voted against the permit), and instruct the board to approve the swine CAFO application.

Jack Hieb, attorney representing the Grant County Board of Adjustment, assisted by Reese Almond, attorney for the Grant County Concerned Citizens, countered that boards retain authority to deny Conditional Use Permits when they determine the project does not align with the community’s interests. Hieb also argued that the ex parte communications of board members were not invited, and that those communications were divulged at the outset of the permit hearing.

Judge Means struck down the Berg Farms appeal, noting that while there was ex parte communication “for sure,” that communication was uninvited, fully divulged, and that the applicants had waived their right to objection before the hearing. She furthermore reaffirmed that it is fully within the authority of boards to deny permits when they deem the project not to be in the public interest.

During the May 2017 public hearing on the Berg Farms swine CAFO application, twenty members of the Grant County Concerned Citizens, along with Sioux Falls Attorney Mitch Peterson, testified in opposition to the permit, and provided well-researched data regarding negative impacts of the proposed facility.

Recognizing that many boards have been misled into believing otherwise, opposition focused on the clear message that, even when deciding on an application that meets all the basic requirements of the ordinance, the board has the authority to deny the permit. This week’s circuit court decision reaffirms that message to boards across the state: you can say no.

Dakota Rural Action applauds the work of the Grant County Concerned Citizens, the Grant County Board of Adjustment, and Judge Carmen Means in upholding the authority of boards to say no to permitting projects that are detrimental to the public interest.