Today’s hearing on HB 1322 in House Commerce Committee featured a line-up of South Dakota cottage food producers and organizations (including DRA, Institute for Justice, Center for Rural Affairs, and Americans for Prosperity) coming out in support of much-needed updates to our 12-year-old Cottage Foods Law.

Unfortunately, despite already having a “bite at the apple” and securing some amendments they claimed satisfied them ahead of the hearing, SD Retailers Association showed up to oppose the bill and heaped on three more “recommended amendments” in committee. One of those amendments clarifies language in Section 1 of the bill–that all foods allowed are specifically required to be prepared in a home kitchen. No problem. That’s the point, so if it wasn’t clear enough, we can make it so.

The second was to remove the $100 cap on food safety training cost, which we were much less happy about. We recognize that the likely partner for this training is SDSU Extension Food Safety folks, since they are the folks we’ve been working with on guidance and training under the existing law for twelve years. Retailers seemed concerned that with a cap that low, their price for their own members taking ServSafe (an entirely different training) would look high. Well, OK…maybe we can deal?

The third “suggested amendment” was to explicitly prohibit cottage foods producers from shipping their goods. Let’s think about that…

Existing law does not expressly allow nor does it prohibit online sales or shipping of home-processed foods. Therefore, explicitly prohibiting shipping makes our law more rather than less restrictive. We believe that there are producers currently shipping some items (such as jams and jellies) on a limited basis. 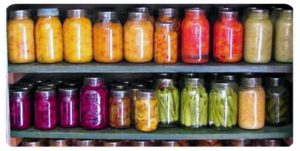 Say a summer visitor to our fair state buys a jar of amazing chokecherry jelly at a farmers market, and contacts the vendor (through the legally required contact info on the label) to ask if they would be willing to ship them a few more jars or even a case. At a certain volume or frequency, that producer might say no just because of the work it takes to service a non-local clientele. OR they may decide to scale up to commercial scale and sell wholesale volume through…retailers.

Typically, cottage foods producers don’t focus primarily on the online sales venue because a) their primary customer base is local/are regulars, and b) it’s a lot of work to (in addition to making, packaging, and labeling the product itself) set up and maintain an online presence, and prepare, package, invoice, and ship (what are typically) small quantities of product. At a certain point your home kitchen and your own gumption can’t keep up with the volume of that work (and the income isn’t enough to hire on employees).

Is it possible that some cottage foods producers are “taking advantage” of this loophole to do larger volumes via online sales and shipping? Sure. But it’s neither a food safety issue (if the product is non-perishable & safe to sell from your home, farm stand, or farmers market, it’s safe to sell through the mail), nor is it a lost revenue issue (all cottage foods sales are subject to South Dakota’s regressive foods tax). So, what is the issue, exactly, other than the desire to maintain the hegemony of the SD Retailers Association?

It’s sad, really, for the Retailer’s members and for state and local revenue coffers because, according to the Institute for Justice’s report, Flour Power:

Restrictive cottage food laws can hinder entrepreneurship. Rural producers are less likely than their urban and suburban peers to plan to expand their businesses if the government prohibits them from selling certain types of foods that they would otherwise like to sell.

The fact is, increased entrepreneurship in South Dakota (and especially rural South Dakota–a huge swath of our state) could help grow more businesses to the brick-and-mortar stage, and create more potential for relationships between retailers and the producers who’ve grown a local and regional following for their products by starting and perfecting their products at the cottage foods level.

It reminds me of all the years that farmers markets wrangled with their local grocery stores who, sadly, saw them as unwelcome competition. That scarcity mindset prevented blossoming of the good relationships that many brick-and-mortars now have with local markets and producers. Communities with lively farmers markets attract folks who stop at multiple places to complete their shopping excursion–and they’re likely to pick up “extras” at the grocery to complete the fun, new recipe they learned at the farmers market. It’s a win-win.

SD Retailers Association is sadly still stuck in the scarcity mindset, to the detriment of their members. It’s time for a re-vamp of South Dakota’s cottage foods law, and a more open environment can benefit everyone.

House Commerce Committee meets again on Wednesday to consider possible amendments to the Cottage Foods bill. Please contact Representatives on the committee and tell them you support HB 1322 without the Retailers’ restrictive anti-shipping amendment.

Thank You for Taking Action!