Why So Many Hogs in the Capital?

On Wednesday we officially passed the final deadline for bill intro 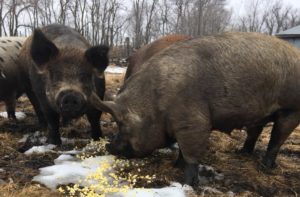 duction. In addition to many extensive and detailed bills, the attentive bill reader will also note the large number of bills that seem to say nothing at all. Take House Bill 1127 – “Enhance South Dakota”. If you take a look at the text of this legislation, it says:

An Act to enhance South Dakota.

Be it enacted by the Legislature of the State of South Dakota:

Section 1. The Legislature shall pursue opportunities to enhance the state.

That uses a lot of words to say nothing at all, right? Bills like this are referred to as Hoghouse, Vehicle, or Carcass bills. One way to think about bills in the legislative process is through the analogy of letters and envelopes. The ‘letter’ is the actual text of the bill – what it would actually do. The ‘envelope’ is the bill number, which is assigned at filing and officially includes it in the session. The letter needs an envelope to move through the session!

A hoghouse or vehicle bill is an envelope without a letter! They allow legislators to introduce new legislation late in the session way past the introduction deadline. They can be used positively, leaving space for necessary bills that weren’t developed by the deadline, or for a legislator who had an idea but didn’t get the legal implementation finalized early enough. They can also be used more deviously, particularly within a setting that possesses a supermajority of one party. It is not unheard of for a bill like HB 1127 to get passed all the way to the floor of the second chamber before its text is added in – thus thwarting the process whereby citizens and community groups can have input into the process. It is also possible for ‘hoghousing’ to be used as a verb – taking a legitimate piece of legislation and passing an amendment that is so substantive that it ends up operating in an entirely different way than originally intended.

This upcoming week we will see the first hearing on two important bills. The first, SB 85, is a bill seeking $10,000,000 to study the feasibility of piping water from the Missouri River to West River communities, including Rapid City. The increasing population and commercial water usage, combined with the scarcity of water resources in the region, are the driving causes of this study. This project has significant financial, social, legal, and ecological implications – which is why we support taking the time to do a comprehensive study into all those areas. SB 166 seeks to repeal South Dakota’s food tax, which inequitably impacts at-risk or food insecure members of our communities. Because of recent increases in state revenue, proponents of this bill believe now is the time for this tax cut. If you are interested in testifying in favor of this bill, please contact Chase! Contact information is below.

On Wednesday we saw the introduction of two bills that DRA was active in organizing. HB 1322 is to ‘provide for the direct sale of certain home-produced or home-processed foods and food products.’ This is a reform of cottage food laws that would update and improve the process for home producers throughout the state, as well as broaden the scope of what can be produced without repealing food safety regulations. The introduced language is currently undergoing some “tweaking” due to concerns expressed by producers. SB 204 is to ‘establish a process for the abandonment of certain pipelines.’ This is a critical piece of legislation that would require companies to provide financial securities for certain pipelines once they are decommissioned and abandoned. It also provides for a process whereby easements can be cancelled after certain pipelines are abandoned. Currently, easements are perpetual, and can be sold to new companies once a project is finished.

There are many new bills that we’ve added to our watchlist that are awaiting their first hearing. Among these are SB 145, which ‘provide[s] protections and workplace safety for meat and poultry processing workers.’ Another is SB 181, which would ‘require the Department of Agriculture and Natural Resources to assemble a task force to study the adoption of a watershed ecosystems management approach.’ Below is a short list of passed/killed bills that we’ve been watching for your reference.

Get involved with our legislative work!

There are currently around 35 bills that DRA is watching closely as supporters, opponents, or interested from the sidelines. Our lobbying efforts rely greatly upon our members’ expertise, insights, and engagement testifying in Pierre.  A group of interested members from across the state meet every Thursday evening by zoom at 6:30pm CT (5:30pm MT) to talk through bills we’re watching, negotiations we are involved in, and strategy on various issues. If you are interested in learning more about our work in Pierre, or want to share your expertise and thoughts on topics like energy, water rights, agricultural practices and policy, etc. – consider joining the Legislative Committee!

Contact Lobbyist Chase Jensen at chase@dakotarural.org or call (605) 697-5204 x250 with questions or to serve on the legislative committee.

DRA’s work at the Legislative Session is 100% funded by members like YOU!
Please consider an investment in our legislative fund by visiting:
https://www.dakotarural.org/leg-session/
Or, you can mail donations to us at PO Box 549 Brookings, SD 57006