On Tuesday April 5th 2022, Lincoln County Commissioner heard the appeal of Planning and Zoning’s decision to allow Primo Feedlot to expand from 1,000 to 2,000 head of cattle. The public comment period and discussion lasted almost two hours as both sides of the issue voiced their opinions and the county commissioners tried to find a “compromise.” Ultimately, postponing the conversation for 45 days to consider adding extra conditions to the permit that would protect a nearby church, require an environmental bond, and discharge easement. Because the county doesn’t have precedent for these types of conditions, the postponement is in place for them to figure out those conditions.

What this conversation made abundantly clear was that Lincoln county residents and commissioners are not just thinking about this particular CAFO, but what the future of Lincoln county could look like. In his long winded speech about why he was making the decision he was making, Commissioner Arends was clearly thinking ahead to his upcoming election, but he also fixated on a point one proponent of the expansion made: if we don’t want CAFOs and we don’t want carbon pipelines, what do we want? This question: what do we want? Has come up in a lot of county meetings lately because the county is one of the fastest growing in the nation, and many people are concerned about preserving land for agricultural use. Arends stated that, “Agriculture goes to the essence of who we are as a county” 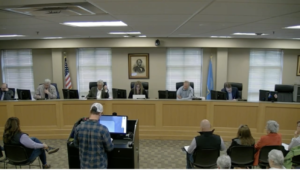 Ross Hulstein, the applicant for this CAFO, said that the only way future generations would be able to get into farming at all is to own CAFOs. While this speaks to broader issues with federal policy that props up the factory farm system, but these comments leave a lot out. When we say CAFOs are the only option, or people who are against CAFOs are against ag, we forget that factory farms are the reason young farmers can’t afford to farm, not the solution. As Ernie Stratmeyer said,

“One of the first places where I see that we get off track here is when they refer to these commercial industries called CAFOs which are factory farms and refer to it as ag when it is an industrial commercial structure and building. It’s not anything like a regular farm. I grew up on a farm…I know what a farm is. A confinement is not ag. That is the first thing that needs to be cleared up.”

As Lincoln County residents and commissioners consider what they want the county to look like as it grows, hopefully they remember this. Promoting agriculture does not mean promoting factory farms. It means providing support for independent producers, family farms, and people who are trying to have a positive impact on the environment for years to come. As Tony Ventura said in the meeting, “Right to farm does not mean right to harm.” So let’s keep fighting for agricultural counties that support our independent producers, environment, and future generations.

If you or someone you know has been effected by CAFO developments, contact DRA to get involved.

about 9 months ago
This message is only visible to admins.
Problem displaying Facebook posts. Backup cache in use.
PPCA Error: Due to Facebook API changes it is no longer possible to display a feed from a Facebook Page you are not an admin of. The Facebook feed below is not using a valid Access Token for this Facebook page and so has stopped updating.